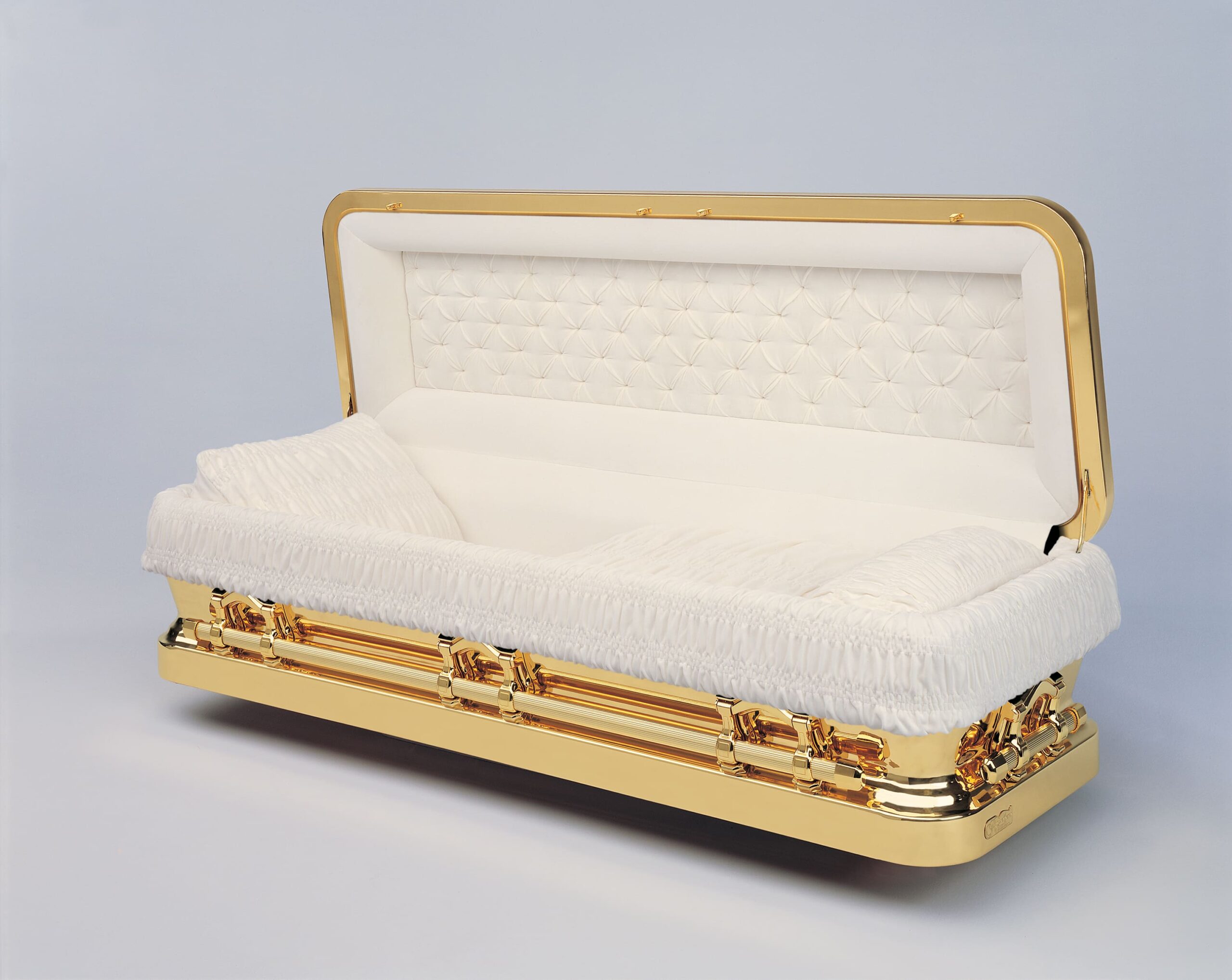 Have you ever seen a gold casket?

Most people are trying to balance value with aesthetics when choosing a casket. But for some, money is no object and a gold casket represents the height of luxury.

Note: Caskets and coffins are different, even though most people use them interchangeably. As all gold funerary boxes are caskets, we will used only “casket” and not “coffin” in this article.

What Are Gold Caskets?

No surprise, a gold casket is a casket made of gold. Gold symbolizes success, wealth, prestige, and prosperity. No wonder that many big celebrities and billionaires choose to be buried in a gold casket. It is the perfect statement for a luxurious, final send-off.

Are They Made of Solid Gold?

Most gold caskets are not made of solid gold. They are often made of a bronze base and then plated with gold. But this doesn’t mean they are cheap. Coating the hardware in gold still requires a substantial amount of the base metal and skill and comes at a hefty price tag.

Prices fluctuate, but gold is currently trading around $1800 per ounce.

You probably recall seeing a gold casket used in a celebrity funeral. Many have used the Promethean casket. See the short list below.

The Promethean Casket is a custom-made gold casket manufactured by Batesville Casket Company.

Construction features a 48 oz. bronze base plated with 14-karat gold hardware. It is often called the “gold standard” or the “golden sendoff” because of its luxurious finish.

Both the interior and exterior of a Promethean casket are corrosion and rust-resistant.

The exterior is polished with a unique mirror finish. Inside you will find velvet interiors. The casket features a locking mechanism, and other essential hardware.

The Promethean casket is handmade by technicians and requires approximately two weeks of labor. The Promethean Casket is one of the most famous expensive caskets. It is not entirely made of solid gold, but still considered the top-of-the-line model of Batesville.

Here are some of the renown individuals who used the Promethean for their burial:

On June 9, 2020 George Floyd was buried at Houston Memorial Garden in Pearland, Texas.

Two funeral services took place at The Fountain Of Praise: the first was a public viewing on Monday and then an invite-only service on Tuesday.

George Floyd was laid to rest in a Promethean gold-plated casket.

Floyd Mayweather, former American boxer, raised money from a GoFundMe campaign which collected $13 million in donations worldwide. This money was used to purchase the gold-plated casket for George Floyd. Estimated cost was $25,000.

Michael Jackson’s final resting place is a Promethean casket. Indeed, a gold casket is fitting for the King of Pop. His casket had blue velvet interiors.

For his burial in 2009, the casket was encased in concrete. He was buried in Holly Terrace Grand Mausoleum at Glendale Forest Lawn Memorial Park in Los Angeles. Additional security was put in place with CCTV cameras and sensors installed.

Even before Michael Jackson’s death, the Promethean gold casket was already being sold by Batesville. Many other celebrities and billionaires have purchased this high-end casket.

Aretha Franklin, a famous American singer, songwriter, and actress was buried in the Promethean. The Queen of Soul was laid to rest in a gold full couch casket that was open for viewing.

After her funeral in 2018, Aretha Franklin was buried at Woodlawn Cemetery in Detroit.

James Brown, the Godfather of Soul, was also buried in the Promethean. His casket was driven through the streets of New York by a white horse-drawn carriage. The final destination was the Apollo Theater. (not for burial)

Reports claim that James Brown’s body was never buried. Instead, it is rumored that his body was mummified. Whether or not James Brown is still encased in the Promethean is inconclusive.

Zsa Zsa Gabor, an American actress and socialite, was gifted with a 24-karat gold casket in 2011. Although she was still alive at the time, the actress kept the gift offered by an upscale casket company called The Golden Casket. Gold caskets manufactured by this company are gilded by hand and each casket takes about 200 hours to construct.

Is this the most expensive golden casket ever made? We can’t prove it, but this is a solid gold casket and comes with a hefty price tag.

The casket’s design emphasizes its heritage, as seen in the engraving of the casket’s sides.

This 14k gold casket does not have an official name and it is not available on the market. It was featured in a coffin exhibition in Kuala Lumpur, Malaysia, and offered with a whopping price tag of $217,000.

How Much Does a Gold Casket Cost?

Rest in peace inside a 24k gold casket.

Rest in peace inside a 24K gold casket.

Posted by Secret Lives of the Super Rich on Thursday, March 21, 2019

The Promethean, which is one of the most famous and expensive caskets in the world is still being produced and available today. Retail cost for a Promethean ranges from $24,000 to $30,000. Prices vary depending on distributor.

And there are pricier options. Zsa Zsa Gabor’s gold casket, the one offered by The Golden Casket, costs about $40,000.

To compare the stark difference of a gold casket with traditional options, the average cost of a casket is a little more than $2,000. Traditional caskets are usually made of steel and wood. The higher-end caskets made of copper, bronze, and mahogany can cost as much as $10,000.

If you want the look of a gold casket but don’t want to splurge for the precious metal, you can check out Titan Caskets. They make quality steel caskets that are available in several finishes, colors, and style selections.

You can also design your casket according to your liking for a personal touch.

Rental caskets are another option for families with a limited budget.

Who was buried in a gold casket?

Michael Jackson, Aretha Franklin, and James Brown are just some of the celebrities that were laid to rest in gold caskets. They were all interred in the Promethean casket, a famous 14k gold-plated casket manufactured by Batesville Casket Company.

How much does a gold coffin cost?

What does a gold casket mean?

A gold casket symbolizes wealth, success, and prosperity. It is suitable for people who want a luxurious send-off. Gold lasts forever and is truly an opulent way to go.

How long does it take to make a gold casket?

A gold casket takes about 150 to 200 hours to manufacture. Some companies may have a small inventory on hand. But they are labor intensive and usually made to order. It is recommended to plan ahead if a gold casket is part of your plans.