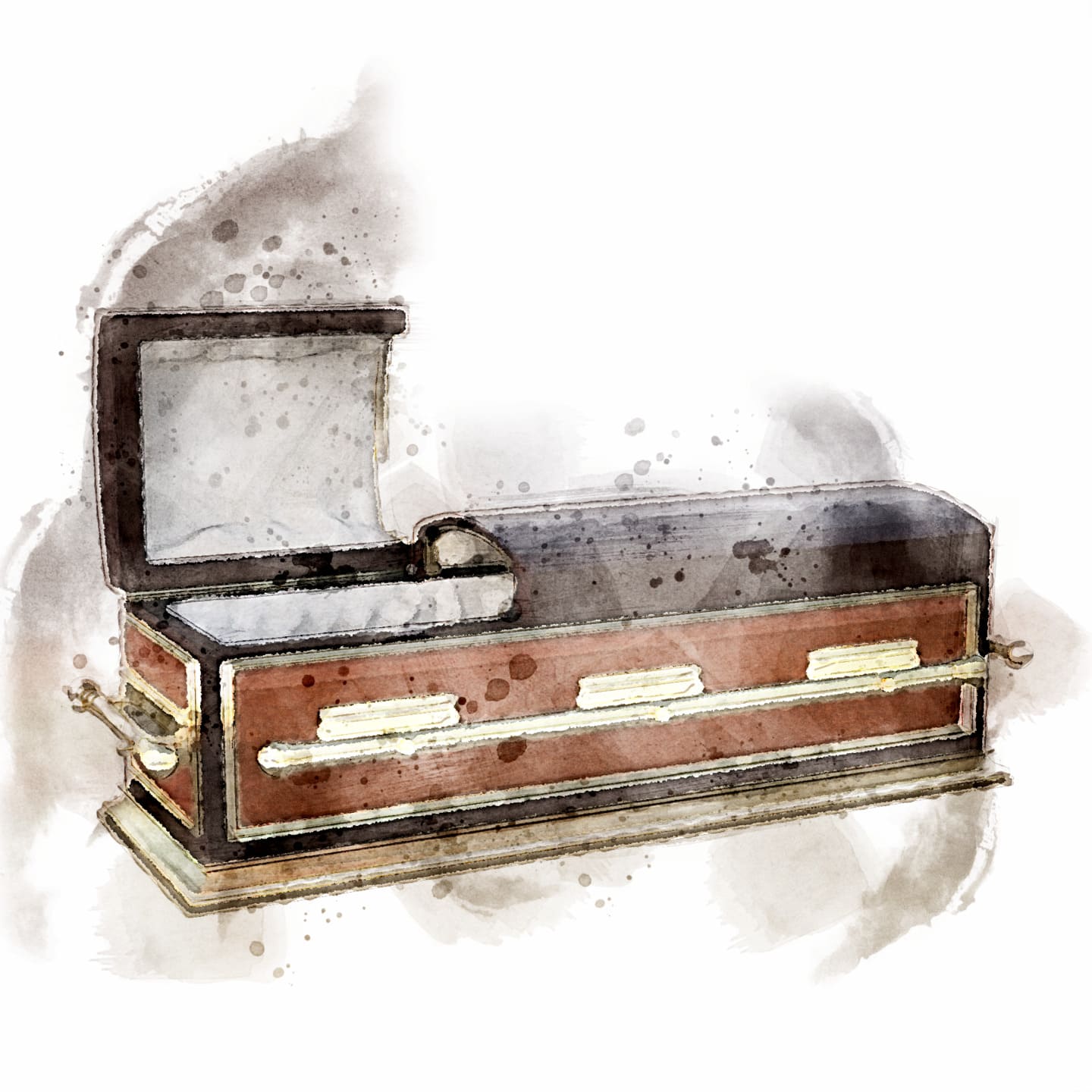 There are a wide range of casket styles to choose from. One of the first decisions is whether you want a half couch or a full couch casket. Most people choose half-couch without knowing the difference, but full couch caskets are available in most models.

In this article, you will find out the main differences between a half couch and a full couch casket. This will help you decide what the better option is for your loved one.

Note: You might see that the words “casket” and “coffin” are used interchangeably. Although many people think they are synonyms, they actually differ from each other.

Half Couch or Full Couch Casket? How to Choose?

Choosing between a split couch and a full couch casket mainly depends on how you want to present the deceased during viewings and visitations.

On the other hand, you might choose a full couch casket if:

Here are some details about the key differences between the two types of caskets.

A half-couch casket has a closed foot end while the top portion is open. Contrary to popular belief, the division of the top and bottom portion of a half-couch casket is actually not equally divided. The separation of the lid is not exactly at the center, so the foot portion is longer than the head portion. In the casket pictured above, it’s about a 2/3 foot and 1/3 head.

A half-couch casket is a good option if you think the standard sized casket may be too short for the deceased. It can be expensive to get a longer casket, so funeral directors often bend the knees or adjust the feet to make the body fit. Read our guide if you are considering an oversized casket.

In some caskets, the interior of the bottom end are sometimes unfinished. Because it will not be seen during open casket viewings, some manufacturers do not put that much cloth and design in the bottom portion. (this can reduce cost)

However, for higher-end caskets such as those made of copper and bronze, you can expect that the full interior will be finished whether or not the bottom half is going to be visible during an open-casket viewing.

A full couch casket opens with the lid in one piece. Since there is no separation, the whole body of the deceased will be visible during open-casket viewing. These are also commonly used in closed casket funerals since there is no need to open the lid.

In a full couch casket, the whole body is visible and will require more attention. They will need to be styled from top to bottom, including socks and shoes. Funeral directors must make sure that all the details of presentation are taken care of (e.g. feet pointed in the right direction).

Kari Northey, a licensed funeral director (no affiliation) explains the difference between a half couch and a full couch casket in a 2-minute video.

Why Is There a Difference?

While there is no exact explanation why there are two styles of casket, it is assumed that the half couch was introduced as viewing and open caskets became more popular. Some factors affect cultural preferences are location, viewing traditions, and the time period.

A coffin can be considered a full couch since the opening and closing of the lid would reveal the full body of the deceased. For this reason, a full couch is still popular in some parts of the UK.

Half Couch Caskets Focus on the Face

When we interact with a person, we normally focus on the upper portion of their body particularly their face, hand, and arm gestures. In contrast, we rarely put attention on the legs or the feet.

It’s the same in the way at funerals, people are more interested in the person’s face because it is what they are most familiar with.

Viewings and visitations allow families to have a final look at the deceased. We all have different reactions. It could be comforting to say goodbye. Or it may help with acceptance, achieve closure, or even begin the healing process.

Viewing – How to Dress the Body?

Split-couch caskets help save time in preparing the deceased. Many families skip shoes altogether because they would not be seen anyway.

More than any other clothing, it can also be challenging to get shoes on a body especially if it has been embalmed. Sometimes the feet swell, or they have become too stiff.

This requires more time and effort from funeral directors to prepare the body and to ensure that all details are presentable for viewing.

Many people believe that the traditions of choosing between a full couch and half couch caskets have been influenced by the rise of funeral parlors. Particularly the popularity of viewing and visitation services.

However, according to Kari Northey, full and half-couch caskets have always existed. There is no exact reason why these two types of caskets exist but the tradition of using a half couch or full couch casket is simply influenced by changes in time and preferences.

Flower Options for Half Couch and Full Couch Caskets

There are many options for funeral designs and flowers that you can place over a casket. The construction of these casket decorations depends whether the casket is full couch or half couch.

A casket spray is designed to cover the top portion of the casket. There are two basic types of casket sprays:

Check this article for casket spray designs and the best place to buy one..

A casket blanket is a design of flowers constructed on a piece of fabric (such as burlap) that is designed to drape over the top of the casket.

There are different ways to drape a flag on a casket, depending on whether it is a half couch or full couch.

Floral garland are flowers that are displayed over the hinge of an open casket. It is usually constructed by binding the foliage and blossoms together by wiring, taping, or gluing the materials in a loose rope-like design.

A casket scarf is a floral arrangement that is draped over a small portion of the casket, either lengthwise from head to foot or draped over from front to back. Similar to a casket blanket, it is usually placed in fabric but it is smaller.

What is the difference between a full couch casket and a half-couch casket?

Do they function differently?